As I travel with a truck and trailer full of antler I always hear the same thing every time.

“Did you kill all of those?”

This post is going to go into the life of an antler as it can be pretty interesting how it comes to be and I feel it is good for people to be educated as some people are not lucky enough to grow up in a family where this is a way of life.

Antlers are extensions of the skull grown by members of the deer family(wikipedia). When they grow they are covered in velvet and have blood pumping through them. Each year they grow bigger and bigger. Right before rutt the antler begins to harden and the animal starts to rub the velvet off creating the nice brown color we like to see. The animals then use the antlers to fight for their women. They break them fighting and gouging each other and sometimes it does result in death. As spring comes the males stop producing so much testosterone and in the process the antler is shed. Within a month the new antlers will begin growing in again and the process has started over. Most people don’t realize they are lost every year but its natural.

After the antlers have been shed the shed hunters go out and look for that brown gold. The lives of the animals can be hung in the balance if it was a harsh winter. Ethically, it is best if the shed hunters wait for the animals to leave the area so that they don’t get ran around and die. Lots of states are enlisting new laws to protect the animals in their fragile winter state.

Hope this helps answer any questions you may have about the antler process. 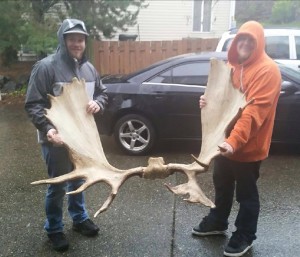 With every big moose comes a huge story. Moose are large mammals that can weigh as much as 1.500 pounds. There are around 1,000,000 moose in North America according to Wikipedia. In North America we have, from smallest to largest, Shiras moose in the states, Canadian Moose, and the Alaskan Moose.

People all over the world spend vast amounts of money to hunt this solitary beast with palmated antlers. Here in Idaho, moose is a once in a lifetime hunt. It is hard to draw out on and once you do you can kill only one and never be allowed to hunt one again here. 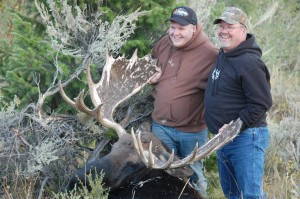 For me this was the hunt of a lifetime. I drew out my first time putting in, which is unheard of, I have family that has been putting in for 30 years and never drawn. We put trail cams out in July and started the hunt for a trophy animal with little success. Throughout summer we had little guys visit our cameras along with a few cows. First day of hunting season comes and we decide to try a completely new area. We hike in and after a few ridges we spot a group of cows flocking to the bull. In the rut the bulls lose their minds and will do anything for their cows. I see the biggest shiras moose I had ever seen and I line up the shot. The bull drops instantly, little did I know they do that when you hit the antler. We wait a few minutes and he stands up. I shoot again and nail him in the spine. We walk up closer and I put him down with a shot to the neck. He is covered in battle scars from the years of rut. We take care of him and get about 700 pounds of meat for the freezer. I just received the Boone and Crockett certificate saying he will go in the record books with a score of 163 2/8. 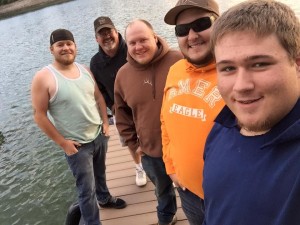 For more than 40 years our family has been on the road buying antler. We have heard lots of stories and love hearing more. Every trip to buy antler is an adventure with friends, family, and new acquaintances. We have seen all sorts of weather and terrain. Our trips start in the winter with roads being closed behind us as we pull into Rawlins, WY and people with antler to sell that they found during hunting season and want to sell to pay for Christmas. The deer and moose begin to lose their antler in January and February and the elk are done in April. We travel all over the Western United States meeting people, grading antler in rain or shine, and always having the money to buy the antler.

People don’t always realize what goes into buying antler but it is a huge process and good for people to see and understand. Every trip starts with someone calling to see if we are interested in buying and they have a big enough pile to make the trip. After that we advertise in the area and along the road there to get as much coverage as possible. We take hundreds of calls and Facebook messages throughout the week, quote prices, and plan the trip. A few days before we leave we call and make sure all of our piles are good to go and everything is lined up. Throughout our trip many things happen such as bad weather, cancellations, and admiring collections of antler that can affect our arrival times. After we get home we sort the antler for crafts and medicine and make sure everything goes its way.

In the end every trip is a success.